on April 17, 2016
So, Salute 2016 was pretty fantastic. Felt slightly less crunched up than last year, with wider concourses and a better layout - and plenty of brilliant things to see. It was also an expensive day and represented the last of my big miniature spending for the year before tightening the wallet. While everything was fresh in the mind, I jotted down some less-than-comprehensive notes.

General
Better organisation of the queue than last year, so when the doors opened it was significantly quicker to zerg into the hall. Arrangement of rows of demo tables interspersed between the stands rather than the much bigger space at the back from last year, made it feel more spacious. We rarely encountered bottlenecks wandering between stands. Not having the coffee stand at the back and rows of seats made a difference too. 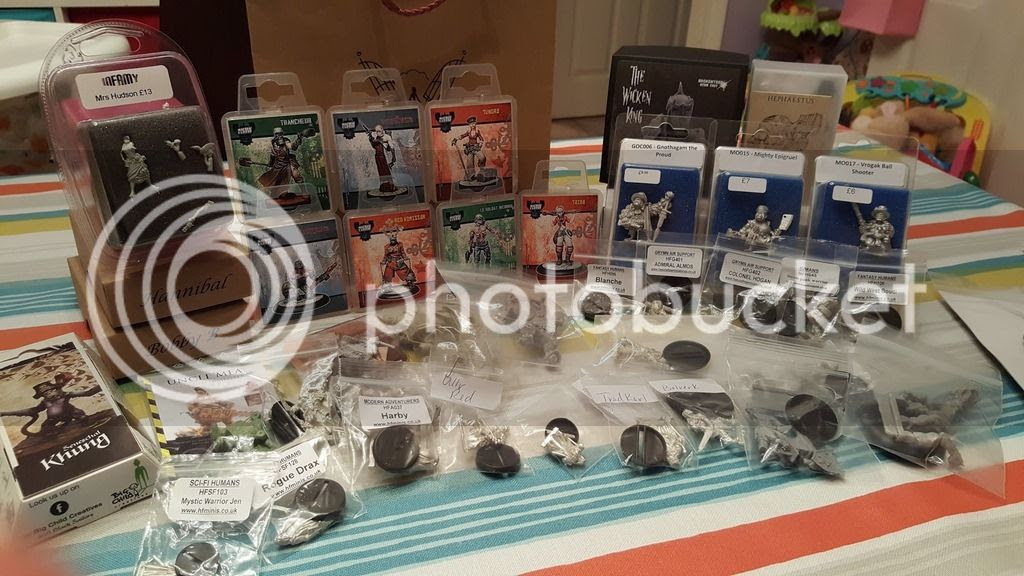 There were even more companies showcasing great ranges, but I couldn't afford or justify everything - and these appealed the most.

In addition to the above, courtesy of Prodos we had an up-close look at their Space Crusade figures. We got to look at Calypso and Nyx at length, and while the cheesecake nature of their hero range isn't to my liking (at all), the casting quality is stunning. There were almost no mold lines - just crisply detailed models.

Companies
From the perspective of being an early Kickstarter backer, seeing the larger stands of Infamy and especially Guild Ball this year was very pleasing - more power to them.

Also, so many Kickstarters coming up from smaller companies. I think 2016 is going to be a very busy hobby year for new projects looking for sponsors. Ones to watch this year for me will be Purgatory and Wonderlands for their upcoming skirmish games.

Judging companies on serious topics at a show like this would be silly, so here are the two most important awards.

Painting Demonstrations
I decided this is the year to get an airbrush, so was very keen to watch the Harder & Steenbeck demonstrations from the supreme skills of Angel Giraldez but couldn't get near his airbrush demos, as it was literally always three deep and a throng of tall* people with enormous rucksacks.

Happily, while it was a little quieter, I managed to sneak five minutes apiece on the Studio McVey and Element Games stands with the ridiculously talented Robert "Rogland" Karlsson and Andy Wardle to talk airbrushes and pick their brains briefly on the subject, as my own experience is 10+ years out of date and amateur level.

They have convinced me of the merits of having one in the toolkit, and Andy was kind enough to run through the basics of the dual action so now it's a case of finding a suitable brush and compressor for me - but early contenders are the H&S Evolution 2 in 1 and the Iwata Revolution. If the Revolution's good enough for Mr Wardle, I imagine it will suffice for me :)

People
It was a pleasure to chat with a lot of the stand teams at length, and their talent and enthusiasm was evident for all to see. From Gary at Purgatory about the world building he's doing for his game, through to Mike and Lee at Bendy Boards for tips on how best to sculpt terrain on their Mob Ball team trays, everyone I spoke to was just so damned nice.

Hat tips go out to Mr Lee on Broken Toad's stand who looked like his feet had given up by 15:30, but was still smiling and focusing on the imminent beer on his horizon, and Jérémie Bonamant Teboul for showcasing so many of his incredibly painted figures on his stand.


Sumary
If you enjoy buying miniatures, looking at miniatures, talking about miniatures with the people responsible for crafting, publishing and painting them - and generally having a wonderful day out in the mothership of nerdom, then you'll probably enjoy this next year.