on March 26, 2017
That was a long five weeks of work, colds, terrible family news, colds, house painting and more colds. Normal service is resumed! Now where was I?

Oh yes, painting that Inquisitor. Having changed jobs at the start of the year, I now find myself within 10 minutes' walking of a GW so have made a habit of trying to get down at least one lunchbreak per week and have a little paint. This is the result of February and early March. The lighting in the shop isn't great - it's designed for product promotion in a dark shop - not painting, and I've only been able to chip away in 30 minute sessions, but I'm happy. 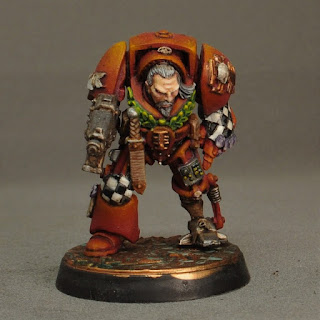 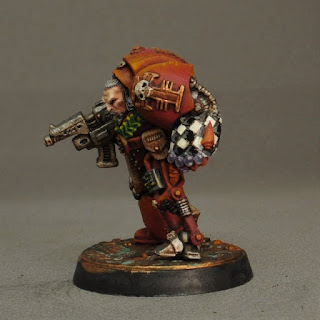 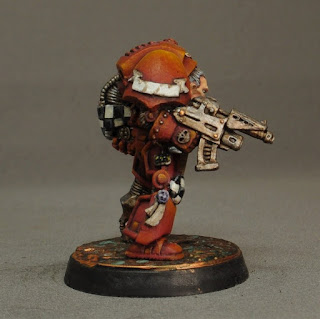 This fellow has a few notable points. It's a sculpt I owned when it originally came out, probably early 90s I guess? He came with a kick-ass Ordo Malleus character. too, so when when both of them were available again through the made-to-order scheme on Games Workshop's site, it was like the mothership calling me home and I was powerless to resist.

The red was fun and the highlights are just yellow glazes to the point of re-visiting the GW Red Period, which I can afford to do as none of my armies would ever use red like this. The base is one of the Sector Imperialis bases, and I'm playing with colours and options - so it's a little unfinished, because they'll be used for all my Space Wolves, and I want to find a scheme that suits all my Imperial forces.

He was rushed in for the local GW painting competition but was beaten into third place by a really well painted Ultramarine, and a reasonably painted Belisarius Cawl - but how superb is that sculpt?

It is, I think, the first figure painted entirely somewhere not my home. Literally stepping outside my comfort zone on this one. Interesting experience. While I'm unlikely to do a full figure end-to-end as the poor lighting bugs me on fine detail and colour choices, I will continue to chip away at larger projects in this way during lunchbreaks.

So that's it! Back into the swing now hopefully. More to follow in the coming weeks now I'm back on track.
warhammer 40k