Over the last couple of weeks the most frequent question asked has been how I've managed to push through my army so quickly, to a reasonable standard. This week I wanted to cover some of the things that have allowed me to get so far on this project in a decent time frame. And apologies for the repeated use of "me" and "I" in the below.

A phrase I use in my day job is "how do you eat an elephant?". The answer, of course, is one bite at a time. But initially it seems so daunting to look at a mass of unpainted figures and think "I have no idea where to begin" or "I can't do this".

I'm 84 hours into this project now, in around four weeks, with just over a week left, and have applied a few key learnings.

It started from realising in mid-September that I had enough unassembled Orks to make an army, and Armies on Parade wasn't until end of November.  That crystalised my thinking when I could look at the finish line, and did two things - gave me a target, and made me realise this was going to be ambitious. That's exciting.

I wanted as many figures as possible on a board, completed in five weeks and to get here I had to decide what mattered from the outset. That meant army composition - for me that was simply to assemble everything you can find the drawers. For my Orks, green and yellow are the most important elements because this is a Bad Moon army. Everything beyond that wasn't of importance.

I want characters and vehicles to be the focal points. The rest are grunts and just need putting on the board.

As I want to assemble and paint every Ork model I have, irrespective of the deadline, this means I'm going to make significant strides toward this amibition as the project progresses. That's also exciting!

This informed my thinking on colour, which I've outlined in a previous post. Reds and blues for shadows, yellows and greens for basecoats and highlights, grey and ivory for non-metallic metals. That means seven or eight paints on my desk, and that's it. They're going to look great.

Let's pause here. I now know what I want to do, how to approach it, what I'll get out of it, and what's needed to achieve it. That's without doing any painting, but now I'm excited and clear on what to do.

I painted a test model. It was a fancy individual model. It took me about four or five hours in total. I'm very pleased with the output. It has sat on my painting table as my little reminder of colour scheme, and how cool everything's going to look. 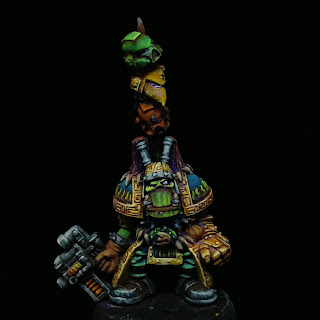 After painting a single test model, I applied the same for a whole squad, but following the guidelines below. This allowed me to try and fail. For example, my original approach was painting yellow first because it's the key element - but this led to me flipping it around to get trivial and unimportant elements completed first.

Let's pause again. I now have six figures finished, a firmer idea of how my scheme works, an idea of time needed to achieve a standard of finish I'm happy with, and feel vindicated that my plan has worked out.

That means I've tried and failed on a few areas, tweaked the process, and have an illustration sitting in front of me for what I can achieve. This is motivating! Now it's time to distil that into the advice for painting everything else.

Every time I wanted to paint, I set an objective for the session. Start from a single goal for that day whether it's "drill the bolter barrels for everything", "base the display board", "finish a squad of five", "edge highlight a vehicle" or "paint the skin on ten Orks", and I painted until that goal was met. Some days that was an hour, others it was three or four hours. It meant the painting session was completed and a tangible output was sat in front of me.

Just because we have a goal, doesn't mean you have infinite time to complete it. I work full-time and have a family, so at most I have three hours at night to do other things. That time's precious and must be spent well.

First thought is often the best thought. I don't have the time to overthink and noodle around. So if I thought "where does the highlight go", instead of analysing each piece under different lighting conditions and trying to match it perfectly to other models, I just put paint where it felt right to put it! That's not very scientific, but it works. More importantly, now you can do the next one the same and the consistency across models will help to sell the effect.

I want an army on the tabletop, not an army being entered at a competitive painting event. So don't try to paint it to that standard.

Technique is secondary to output. Don't stop to craft perfect layers or smooth your blends There isn't time. Keep to the concept.

I opted to paint the metallics as non-metallic, and not doing it with metallic paints and washes. You may not want to take that approach, but I was happy to create "pound shop NMM" which passes first glance as perfectly fine, and nothing more than that is necessary.

Paint inner areas first and fast. No, still not quick enough, get faster. For me, after trial and error on the first couple of units, I opted to use brown or a grey onto fabrics and shoes, quickly, then left cleaning up for when I applied the yellows and greens that mattered to me.

The brush you're using right now is too small for this project. Get a bigger one. The majority of my painting has been with the equivalent of a W&N size 2 or 3. I do not respect or treat my brushes well. Specifically, my two main project brushes are a cheap, large, synthetic brush bought as part of a large pack, so about 50p for that brush to get base on and a nicer Kolinsky Roubloff for most of the work covering a smaller space, which cost about £2 and is a remarkable workhorse.

The bigger it is, the more space you cover with a single stroke. The less strokes needed, the faster you progress. Make your own phallic jokes at this point, because honestly ... it's all here.

When I do need precision and finesse, I've gone back to my Broken Toad size 0 for detail work. It's the last brush to touch each model, and only used on teeth, fingernails, eyes, and reaching areas that are visible but not easily reached with a chunkier brush.

Undersides of most of the models aren't painted very well. I don't care, because none of us will be turning this model upside down to inspect the triceps or underside of the jaw. Why waste time painting that area? Because it is wasted time you could have spent on painting another model. 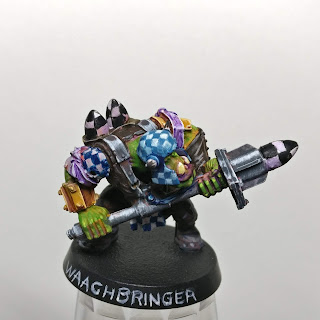 Checks have been invaluable for me to break up boring surfaces, without having to think too hard. They've also been great at hiding away hard to remove mould lines on older metal elements.By setting the check against the line and working out, they disappear into the pattern. My deff dread is a great example here because some of the mould lines are brutal and I haven't the patience to file them down. But you can't see most, because the check magics them away.

My Gretchin are all wearing a single strip of face paint. Want to guess where there's an awkward mould line on that model? It would take me five minutes, per figure, of prep work to get rid of that to a satisfactory standard, which impeding the sculpt, so leveraging it as a guiding line made more sense.

When you see the final army, please note the number of times there's grass or flowers in front of feet and boots. I don't want you looking there, so you can't. That's saved a lot of time offsetting lack of neatness for a perfectly fine set of feet.

It's falling into the rabbit hole of dragging something from finished to perfect that can make or break a project like this. If you spent two hours painting a model to an acceptable finish, why are you spending another two hours to finish it all over again? Don't.

You aren't looking at the army and deciding if the straps or boots are painted well, so don't paint them well. Your eye is taking in the scene, then picking out the detail I've painted to lead you toward looking in certain places.That's enough. So put the figure down, declare it complete, and move to the next.

Your rank and file should all be 90% models. Don't spend a minute more than necessary.

Every time another model rolls off the production line, remember you've done something pretty cool here. Add it to a unit. Admire the unit growing and looking awesome. Skip the usual self deprecation you probably subject yourself to, and enjoy the result of your hard work, and remember it's another tick on the list of done.